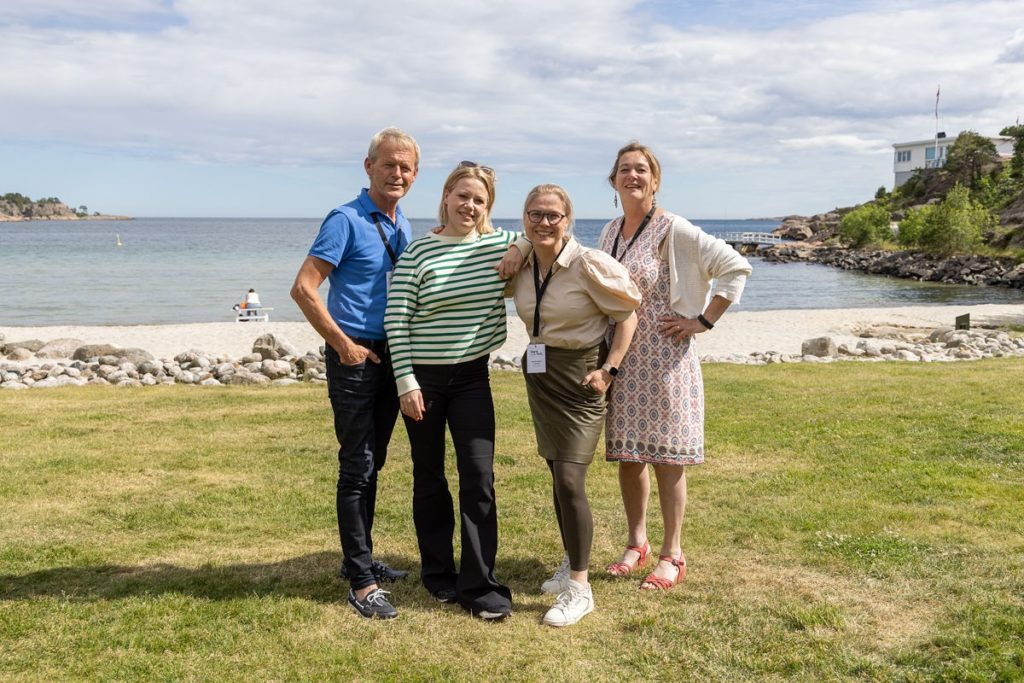 The Norwegian National Advisory Unit on Tick-borne diseases was established in 2014. The service is responsible for increasing and spreading up to date knowledge about ticks and tick-borne diseases, for the benefit of the health care services, patients and the general population in Norway. We are organized as a unit at Sørlandet Hospital in southern Norway (Kristiansand and Arendal), and currently have four employees. Our main goal is to systemize and distribute up to date knowledge about the etiology, diagnosis, treatment and prevention of tick-borne diseases. We are not a treatment center, but offer advice and information to health care professionals, the general public and the media. We also offer courses, training programs, workshops and lectures on ticks and tick-borne diseases. We also initiate, support, co-ordinate & participate in research projects and scientific networks. Our funding comes from the Ministry of Health and Care Services and Sørlandet Hospital.

If you have any questions about ticks or tick-borne diseases you can send us an e-mail: flatt@sshf.no. We will reply within a week. Please do not send any sensitive or personal information. You can also call us on (0047) 38073329/47719461. Our phone hours are Monday to Friday, between 10 am and 2 pm.

Ticks are parasites that feed on the blood of birds, reptiles and mammals, including humans.  They are related to mites and spiders because they are arthropods (not insects). That means they have eight legs. There are over 900 different tick species worldwide. They are found in all parts of the world, in temperate and tropical areas, but also in the Arctic and in deserts.

In Norway, 13 different tick species have been discovered so far. The sheep tick (Ixodes ricinus) is the most common species. The sheep tick is adapted for a temperate climate and is common throughout Europe. Like most ticks, the sheep tick is very small in size, usually between 1mm to 1,5 cm (when fully engorged). They feed off a variety of mammals and birds and can be found in woodland, grassy areas, gardens etc. In Norway ticks are most abundant along the coast from Oslo up to Helgelandskysten (close to Brønnøysund).  Some areas have a high abundance of ticks, while some areas have none. Ticks don’t fly or jump but they crawl up grass or twigs for example and then climb on to animals or humans passing by. The tick will then crawl to an area of exposed skin where they can bite and feed. A tick bite is usually harmless, but because the sheep tick feeds on many different species (rodents, birds, dear, sheep, pets etc.) they often contain different microbes that may cause disease and animals and humans. So called tick-borne diseases.

Diseases spread by tick bites is an increasing problem in Norway and other countries in Europe. In Norway, there are eight different diseases that can be transmitted to humans through tick- bites. Lyme borreliosis and Tick-borne encephalitis (TBE) are the most common. In high endemic areas (coastal areas in southern Norway), around 25% of ticks in are infected with the Borrelia bacteria. In comparison less than 1% of ticks are infected with the TBE-virus. Other microbes have also been discovered in the sheep tick in Norway (anaplasma, neoehrlichia, babesia, rickettsia, tularemia, borrelia myamotoi), but few human cases have been reported. Even though a tick bite may cause disease, several large studies have shown that the risk of getting sick after a tick bite is actually very low – around 2%.

What should i do if i get a tick bite?

What is Lyme borreliosis?

Lyme borreliosis, also called Lyme disease, is the most common tick-borne disease in Norway and Europe. The disease is caused by a group of bacteria called Borrelia bacteria, which can be transmitted to both animals and humans through tick bites. Lyme borreliosis is widespread in the northern hemisphere. You can therefore become infected both in Norway and abroad. There are more than 20 different genospecies of Borrelia bacteria, but only some of the species cause disease in humans. In Europe and Asia, Borrelia afzelii and Borrelia garinii are the most common genospecies, but there are also other species that can cause disease (for example Borrelia burgdorferi sensu stricto, Borrelia spielmanii, and Borrelia bavariensis). Lyme borreliosis can be treated with antibiotics.

What are the symptoms of Lyme borreliosis?

Lyme borreliosis (Lyme disease) is often described as a disease that occurs in three stages, but this is a bit misleading. Rather we distinguis between early local infection (Erytema migrans, Borrelia lymphocytoma) and systemic disease (Neuroborreliosis, Lyme arthritis etc), which means that the borrelia bacteria has spread to other organs and tissues in the body. The most common and usually the only symptom of borreliosis is Erytema migrans – a red rash that expands around the bite site. The rash can appear around 3 -30 days after a tick bite. The most common form of systemic disease in Norway and Europe is Neuroborreliosis. Symptoms of Neuroborreliosis typically appear 1-2 months after the tick bite. The Borrelia bacteria can also spread to the the joints (Lyme arthritis), usually causing inflammation of the knee joint.  The Borrelia bacteria can also spread to the heart (lyme carditis), eye or central nervous system, although this is rare.

Contact a doctor if you experience these symptoms after a tick bite:

How common is Lyme borreliosis in Norway?

*568 cases were reported to the Norwegian Surveillance System for Communicable Diseases in 2022. This figure has yet to be confirmed.

How is Lyme borreliosis diagnosed?

If you get a red rash that expands around the tick, you should make an appointment with your GP. Erytema migrans is a clinical diagnosis (the rash is diagnosed based on appearance). It is not necessary to take any blood tests. In the case of suspected neuroborreliosis both a blood test and a lumbar puncture is necessary. The samples are tested for specific antibodies against the Borrelia bacteria (antibody test). For Lyme arthritis and Acrodermatitis chronica Atrophicans (ACA), a blood sample (antibody test) can be taken together with a biopsi.  The biopsi can be tested for Borrelia-DNA (PCR-test). If systemic Lyme borreliosis  is suspected, it is necessary to be referred to a specialist at a hospital.

TBE is a disease caused by the TBE-virus (tick-borne encephalitis). The virus belongs to the genus flavivirus. Other known viral diseases in this genus are yellow fever, dengue fever, Japanese encephalitis. TBE is a potentially serious disease. There is great variation in the clinical picture. Some people get no symptoms, some get a mild course of the disease, while some can become seriously ill. There are three subtypes of the TBE-virus worldwide: European, Siberian and Far Eastern. In Norway we only have the European subtype which is transmitted through the sheep tick (Ixodes ricinus). Far Eastern TBE-virus is transmitted through Ixodes persulcatus, a tick species that is prevalent in Eastern Europe and eastwards to China and Japan. In rare cases (abroad) people have been infected by consuming unpasteurized milk from goat, sheep or cow. Unlike the Borrelia bacteria where there is little risk of infection if the tick is removed within 24 hours, the TBE-virus can be transmitted immediately after a tick-bite.

The occurrence of TBE in ticks in Norway is low, but has increased since 2018. Particularly in the municipality of Larvik and Porsgrunn (Vestfold and Telemark). On average, less than 1% of ticks are carriers of the TBE virus, but there can be large local variations in incidence. In some places, there may be more TBE virus in ticks, so-called «hot spots». In 2022, around 82 people in Norway were diagnosed with TBE. A majority of those people were hospitalized. The Norwegian Institute of Public Health has analyzed ticks in certain coastal areas in the following counties: Viken, Vestfold and Telemark, Agder, Rogaland, Vestland, Møre and Romsdal, Trøndelag and Nordland. In all these counties, including southern Nordland, ticks with TBE virus have been found. In the same counties, TBE antibodies have also been found in serum from deer and production animals. In areas where TBE has been detected in ticks, there may be a possible risk of transmission to humans. However, as of today, cases of TBE infection have only been reported in Agder, Vestfold and Telemark, and Viken (see figure below). Coastal areas in these counties are the risk areas for TBE in Norway.  The map below shows all rapported TBE-cases in Norway from 1995-2021. Copyright: Kartverket via GeoNorge.

What are the symptoms of TBE?

The incubation period for TBE is 2-28 days. For TBE there is considerable clinical variation from asymptomatic to severe illness.  Some people get no symptoms (asymptomatic infection), some get a mild course of the disease, while some can become very ill. A biphasic course of the disease is common, but not all people experience this. The first phase usually lasts about a week and is often described as a «summer flu», with symptoms such as moderate fever, headaches, muscle aches, nausea, vomiting etc. Some people will recover completely after phase 1 and will probably never know that they have been infected with the TBE virus, unless they are tested for TBE. After a shorter period of symptom improvement and less fever, approximately 30% of people will experience new and more severe symptoms (phase 2). Typical symptoms in phase 2 are higher fever, severe headache, lethargy, confusion, nausea, vomiting, neck stiffness, muscle aches and paralysis. These are symptoms of  meningitis, encephalitis and/or spinal cord inflammation. Adults, especially the elderly, often have a more severe course of illness compared to children. There is no specific antiviral therapy for TBE. Treatment relies on supportive management based on symptom severity. Hospitalization is common. The mortality rate of European TBE is <1%. The Siberian and Far-Eastern type have a higher mortality rate (up to 35%). In Norway, nobody has died of TBE, but deaths have been registered in Sweden and Finland.

How is TBE diagnosed?

The diagnosis of TBE is made by finding antibodies in the blood and spinal fluid, and inflammatory cells in the spinal fluid. Three laboratories in Norway conduct tests for TBE: Sørlandet Hospital in Kristiansand, Vestfold Hospital in Tønsberg and the Norwegian Institute of Public Health in Oslo.

Is there a vaccine against TBE?

Yes. People who are travelling to Norway (or to other countries in Europe) and plan to spend a lot of time outdoors in areas with a known risk of TBE should consider vaccination. The recommendation applies especially to people who often get bitten by ticks. Based on current knowledge, the risk of TBE infection is highest in coastal areas in the following counties: Agder, Vestfold and Telemark, and Viken.